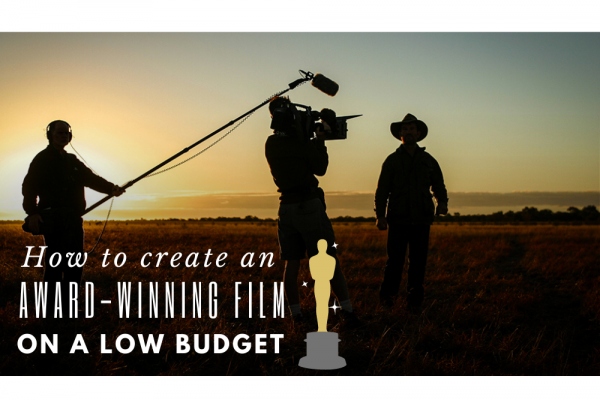 How to create an award-winning film on a low budget

From pre-production, right through to post-production, here are 10 useful tips to help you achieve high-quality, award worthy films, no matter how limited your budget.

It’s no secret that the screenplay is EVERYTHING, however, this is still often over-looked by indie filmmakers. Behind the colourful visuals or jaw-dropping visual effects of every successful film is one essential thing: a captivating story. It’s easy to forget that the majority of people watching films are only focused on the story and how engaging the characters are, rather than impressive techniques. When making a film on a tight budget, let your writing skills flourish.

If you look at a lot of the most successful indie films, they all present a huge, exciting concept, but find creative ways to keep that limited to a small cast and few locations. Buried (2010) explores a U.S. truck driver working in Iraq, who awakes to find he’s been buried alive and only limited time to make it out alive. Open Water (2003) focuses on a couple who are left stranded in the shark-infested ocean after their diving tour boat leaves without them. The entirety of Locke (2013) is confined to a single car journey, yet it never fails to be engaging. If the concept sounds new, audiences will watch and respond to it, even if it is a little rough around the edges. Sometimes that even adds to the charm. Don’t be scared to share your script, or even the idea, to as many people as possible before shooting – if they get excited by it, then there’s a good chance you’re on the right track.

Indie filmmakers often fall into the trap of thinking they need to explain everything within their story for the complexities to shine through. However, purposely leaving information out and increasing the mystery throughout will drastically strengthen your film. This will not only showcase yourself to be a more sophisticated filmmaker but will also allow the audience to envision a much larger world outside of the on-screen action. For example, how many times have you seen a genre film and instantly felt the tension deteriorate after seeing the monster/threat?

Jaws (1975) has one of the most famous inspirational stories, in which Spielberg was planning on showing the audience far more of the shark, however, due to technical problems, had to find creative solutions to suggest its presence without the audience seeing it. This led to a huge reason for it being one of the most successful horror films of all time. This technique should be used no matter the genre and can also be beneficial when writing dialogue or character building.

3. Write What You Have

Despite perhaps being the most common piece of advice, it’s certainly true. It’s easy to get lost within a vastly fantastical world of imagination, only to discover that certain aspects are impossible to pull off without a bottomless bank account. By writing a film based on what you already have access too, you’ll not only be saving a huge percentage of the budget, but you’ll be able to meticulously craft a film that feels unique to you.

The most common suggestion to consider is locations, whether your grandma has an old isolated farmhouse or your cousin’s friend can get you access to a school, these are all useful benefits that can drastically enhance your production value. Beyond locations, writing what you have can be useful in endless scenarios; for example, an ancestor may have a storage of beautiful vintage props and clothing that you could centre your story around. Or perhaps your parents are talented artists who can create one-of-a-kind pieces of art to feature throughout.

Even if you can’t afford an amazing camera, locations and production design are always going to be hugely responsible for the quality of your visuals. Searching for something unique, even if it requires a slightly larger cost than anticipated, is one of the best methods to make your film appear more professional. Finding something dense and quirky will help your film stand out. In addition, developing a story in which your characters have no choice but to stay within the location will also help you achieve this.

The most engaging filmmakers understand the importance of world-building, which can be achieved even if you’re confined to one room. If your script requires a huge set-piece, such as a crash or dramatic death, show the tension before and after, leaving the actual event up to the imagination. Both 10 Cloverfield Lane (2016) and The Night Eats the World (2018) explore big post-apocalyptic narratives, but cleverly utilize and create tension by confining the audience and characters to a single location where sound and subtle clues feed ideas of what could be happening in the outside world.

When you’re limited budget prevents your usage of special effects, don’t be scared to cut away and use sound to tell the story – This can often be more powerful. Both A Clockwork Orange (1971) and Reservoir Dogs (1992) feature disturbing scenes that are drastically enhanced because the scene cuts away from the action, and instead uses sound to paint a picture in the viewer’s minds. Their imagination will always be more horrifying than anything they could see on screen.

6. The Importance of Sound

Many indie filmmakers overlook how important sound is to make your film feel professional. One of the first things film schools teach you, is that sound is the one important factor that dictates whether your film has been made by amateurs and professionals. Believe it or not, audiences will be more forgiving when watching a film with imperfect visuals, however, it’s near impossible to keep a viewer watching if the sound isn’t good. When budgeting, make sure to save a significant portion for the sound department. On set, get an experienced sound recordist and hire good microphones. In post-production, spend time crafting carefully selected/recorded Foley effects. If you can, even for a day, have a professional mixer look at your film, and adjust the levels on good quality monitors.

Whether you’re a producer, writer, director, or production designer, one extremely beneficial technique is to plan ahead for sales online or in-store. You may not be able to afford essential props, costumes, or special effects, however, throughout the year there will always be unbelievable sales that enable you to purchase these without having to break the bank. No matter what budget you’re working on, there are also always ways of sourcing these elements for free. Online sites such as Freecycle are an amazing resource to scan through as you never know what you’ll find.

When you don’t have the budget for impressive visuals or effects, the story and performances are the two things that are going to keep audiences invested. Although it may save time and money hiring your friends, it’s worth using your limited budget to invest in actors who will be able to deliver amazing performances. It’s also worth mentioning that it doesn’t mean the actors have to be stars, or even have much experience, but spending the time to find the right actor is essential for boosting the production value.

Although this shouldn’t be the factor that determines the quality of your story, utilizing a unique but purposeful style can disguise your film’s limited budget. In addition, many indie filmmakers overlook the importance of building atmosphere. Even if you’re film is limited to one location, or focuses purely on conversations, there are always ways to craft memorable, engaging atmospheres. Despite Sinister’s (2012) stretched budget, the filmmakers cleverly decided to exploit darkness as a way of suggesting the film is bigger than it was. By using strong, single light sources that illuminate the subject while intensifying the surrounding darkness, the audiences are unable to study how small the house really is. Haze machines are also an affordable way of amplifying an atmosphere and strengthening the quality of the cinematography.

For the best chance of achieving a professional-looking film on a tight budget, make sure you dedicate as much time as possible for planning ahead. The more time you have to plan, the better the film will be. For example, by carefully scheduling and shot listing beforehand, you’ll be able to squeeze in far more shots to as few days as possible. Make sure to surround yourself with a passionate team who all want the film to be the best it possibly can be. Don’t be scared to share your ideas with outsiders – it’s the most beneficial method of learning whether or not your film works. Don’t be scared to ask for help, and respect and act upon every note you receive before shooting.

No matter what budget you’re working at, filmmaking is all about being creative and utilizing what you have to achieve something spectacular. Don’t let a small budget scare you from making a magical and/or ambitious film. And finally, the most important key to being successful – Make sure you have fun!

Hiring on a budget? You can skip the expense of a casting director and opt to contact actors directly. There are over 3,000 actors and filmmakers on CastandHire, ready to apply for your job. Sign up for FREE and get to work.